Good Luck Soup: The American Experience Through Asian Eyes opens with a somber voiceover from its creator, 31-year-old Matthew Hashiguchi, describing a memory from his childhood: “I was yelling at my dad, I don’t want to be Japanese, I don’t want to be Japanese. I’m not exactly sure why I said that, but obviously, I was angry at the reality of being different. And in my 12-year-old mind, he was responsible for that.”

The feature-length film focuses on Hashiguchi’s family, mainly his grandmother, Eva Yoshida Hashiguchi, and her life leading up to, during, and after internment during World War II. The camera rolls as she paints, gardens, and chats with her grandson about her immigrant parents and their farm in California before they were defrauded of their land in their evacuation from the West Coast in 1942. She speaks of life in camp, and a lot more of life after, after the camps were disbanded in 1946, when she relocated to Cleveland, met her husband, Mitch Hashiguchi, and started a family. Her story is interspersed with shots of her daily life: bowling with friends (and getting quite a few strikes), planning her 88th birthday celebration, old photographs of her family, being at camp, playing basketball, home video footage, and interviews with her children, grandchildren, and sons and daughters-in-law. 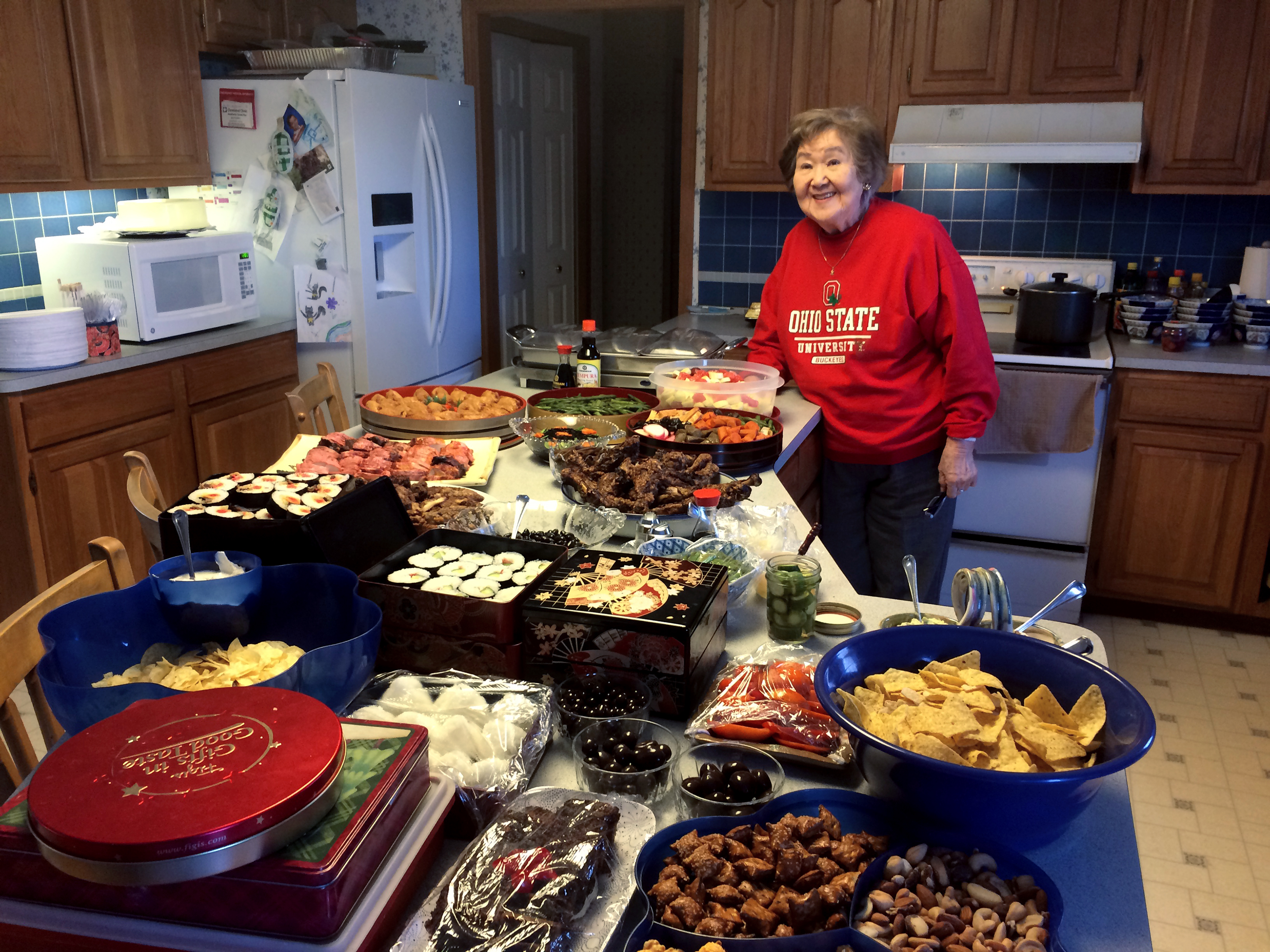 Eva Hashiguchi with good luck soup and other food

The film, while definitely about the internment experience for Eva, reads also as Hashiguchi’s own investigation of his cultural identity. It’s evident that through interviewing his family members about their thoughts on his grandmother’s experience, internment, integration, cultural differences, and discrimination, among other things, he draws conclusions about his own mixed race upbringing. These moments are most telling in interviews, like when his slightly distant un-miked voice explains the difficulty of growing up Italian and Japanese American in a predominantly Irish Catholic neighborhood before asking them about their own experiences. Hashiguchi takes the viewer on this journey—an investigation, maybe, of what brought his family to Cleveland, Ohio, and what it means to have grown different: a self-identity whose meaning continually changes.

Hashiguchi contextualizes his struggles growing up mixed-race in Cleveland within the historical framework of his grandmother’s World War II experiences.

The feature-length documentary is one part of Good Luck Soup, a web-based transmedia documentary project funded through Kickstarter that tells the stories of Japanese Americans and Japanese Canadians before, during, and after World War II. As a piece of the transmedia project, the story of Eva Yoshida Hashiguchi and that of her family is placed into the larger context of the Japanese American experience as a whole during that time.

An experienced documentary filmmaker, Hashiguchi’s work typically focuses on the diverse cultural, social, and ethnic stories of American society adds this project to his award-winning films People Aren’t All Bad and The Lower 9: A Story of Home. The transmedia nature of the project provides a more comprehensive image of the effects of internment on the Japanese American community in the United States and Canada. Transmedia storytelling uses multiple digital platforms to tell of a story experience. In this case, Hashiguchi uses primary and secondary sources of audio interviews from internment survivors and their families, their photographs, artwork, family photos, and written accounts. 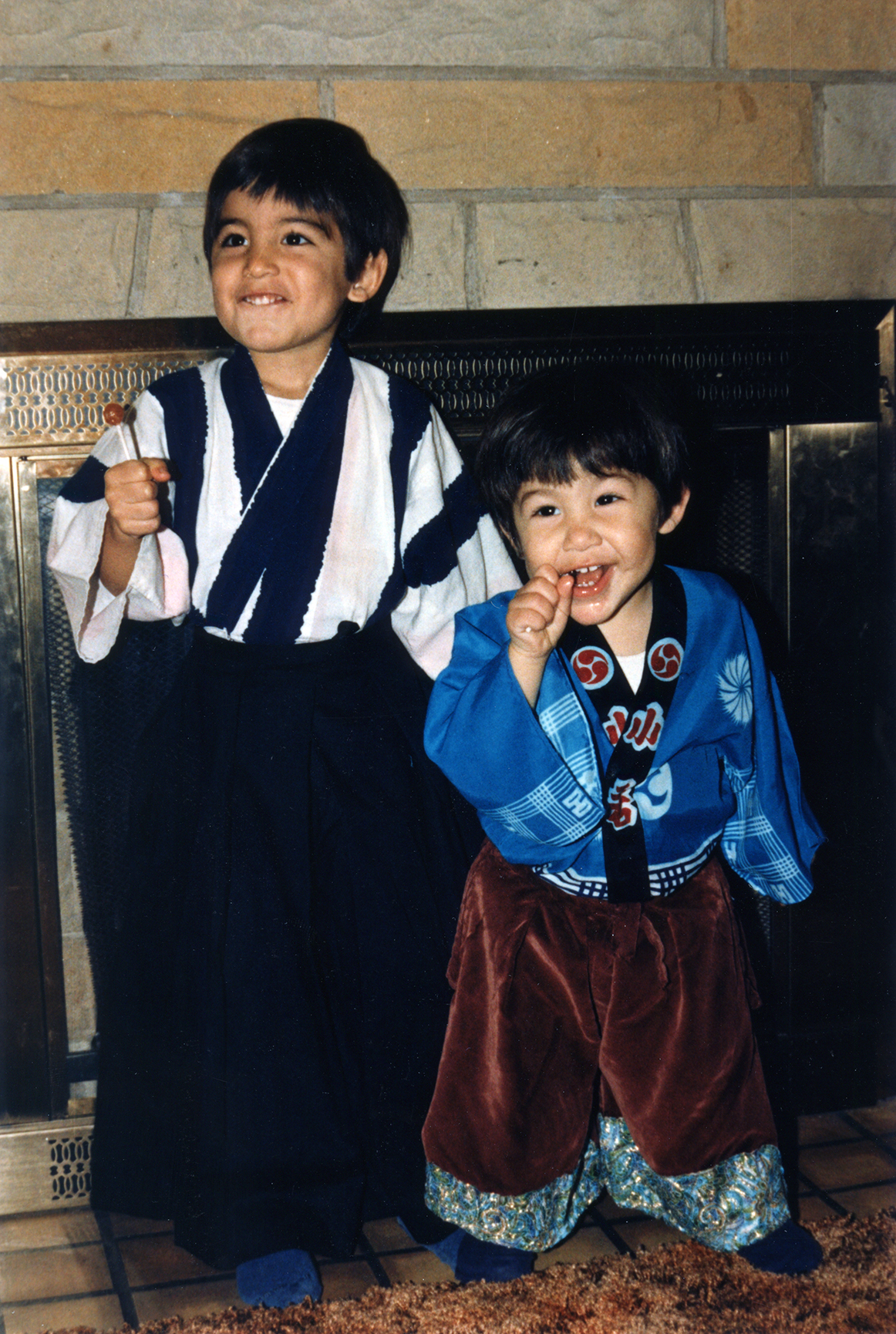 The project’s webpage opens with a trailer of camp footage and home video overlaid with a text overview of internment while a crackling recording plays. A summary of the project follows, as well as a prompt to click to generate a story. A click, and then, a voice begins speaking, a photograph appears, and the journey begins.

Hearing the voices of aging survivors telling of their last meals with their families, missing relatives, of excellent military service and courage, telling about Nisei attempts to help Issei adapt to the concentration camps, telling about community in the camps, daily life, meetings of future spouses—all provide an added dimension to the textbook story of Japanese American internment during World War II. Chapters of the project feature Toyo Miyatake’s photographs and watercolors from Iris Atoji’s father depicting guard towers where inexplicably, the machine guns meant to “protect” the Japanese Americans were pointed inwards at the camp’s residents.

Pearl Harbor, the American entry into the war, Roosevelt’s enactment of Executive Order 9066, the bravery of the 442nd, Fred Korematsu’s long-enduring appeal against the purported constitutionality of internment, President Jimmy Carter’s investigation into internment in 1980, 34 years after the last camp was disbanded, and finally, Ronald Regan’s signing of the Civil Liberties Act in 1988 that authorized reparations to surviving victims of internment—these dog-eared pages of the story of Japanese American internment don’t put faces or voices to the 120,000 interned during the war.

Hashiguchi achieves, with his transmedia documentary, the goal of creating a more full understanding of the effects of internment on the people of the Japanese American and Japanese Canadian communities. The effects of blatant xenophobia enacted into law are apparent. It’s striking, then, what Hashiguchi’s cousin brings up in an interview: that plenty do not ever learn about their countries’ internment of those with Japanese heritage during the war, nor of its effects. As the 75th anniversary of Executive Order 9066 passes, it's important to look at this history, learn from it, and beware of repeating these reprehensible actions.

The film Good Luck Soup will be broadcast nationally on the PBS program America ReFramed this coming May.

Priscilla Wu is an editor at Hyphen.

Visible Letters: Jenny Han's To All the Boys I’ve Loved Before

The Curious Case of the Missing Chandelier